A patented ingredient for a bright and focused energy.

Guayusa – Ilex guayusa – (pronounced “gwhy-you-sah”) is a caffeinated Amazonian super-leaf of the holly species that contains a unique blend of caffeine and polyphenol antioxidants providing a cognitively uplifting energy.

AMATEA™ organic guayusa extract, by Applied Food Sciences, is a highly water-soluble ingredient for the application of nootropic energy intended in beverages or nutritional supplements. AMATEA™ has a distinct fingerprint standardized at 20% caffeine. AMATEA™ also contains other beneficial compounds like chlorogenic acids (an antioxidant similar to what is found in green coffee beans) and rutin (a flavonoid that found in certain fruits and vegetables). Because it is low in tannins, AMATEA™ is not bitter, dry, or chalky tasting like many other more astringent tea extracts. Instead, AMATEA™ is naturally sweet to complement a variety of flavors. AMATEA™ is also USDA organic, Non-GMO, and GRAS (Generally Recognized As Safe) a requirement for use in US food and beverages.

*Applied Food Sciences, Inc. does not sell products direct to consumers. This product is not to be consumed in this format but is intended for further processing or manufacturing.

Flavor – Guayusa is technically very different than other teas in that it lacks heavy tannin or bitter fraction that would typically cause the astringent, dry-chalky, flavor profiles. 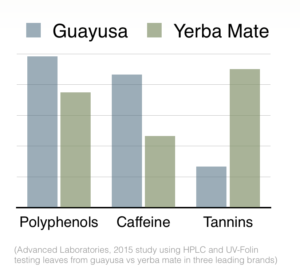 Guayusa is a cousin plant to yerba mate (Ilex paraguariensis), a fellow rainforest holly leaf. However, guayusa is uniquely different than yerba mate in that it tastes sweet, not bitter, and has a distinctively different polyphenolic antioxidant makeup.

The Next Generation of Caffeine?

Caffeine has both therapeutic benefits and negative side-effects in how it interacts with the body. One vindicating factor is due to an adrenal medulla response to caffeine in the release of epinephrine, a “fight-or-flight” hormone (Krieger, 2016). Therefore, side-effects of caffeine resemble those same feelings of flightiness or anxiety that are associated when the body is under stress. Consumers likely know what this feels like after they have had one too many cups of coffee. However, for the ingredient development team at AFS, this presents an opportunity for what AFS declares is the “Next Generation of Caffeine.” Highlighting this category is a patented and clinically studied ingredient called, AMATEA™ organic guayusa extract.

In a double-blind crossover clinical trial, subjects were given 200 mg of caffeine from AMATEA™ organic guayusa extract, a green coffee extract, and a synthetic control, the results showed that the guayusa leaf extract stimulated a significantly lower increase in epinephrine when compared to what was provoked by the control and the green coffee extract (Krieger, 2016).

Results of this study demonstrate that extracellular levels of all the targeted biomarkers were significantly increased by the administration of AMATEA™ as compared to control alone. This study aids in demonstrating the nootropic and cognitively uplifting benefits of AMATEA™ clearly distinguishing it as a preeminent energy ingredient.

U.S. Patent #9345707 – As the sole supplier of AMATEA™ guayusa extract, Applied Food Sciences is the exclusive inventor and owner of a process patent covering the production of enriched natural guayusa, from a single source plant, containing antioxidants, amino acids, and caffeine. This novel process converts fresh guayusa leaves into a healthier energy ingredient standardized for caffeine and polyphenol antioxidants like chlorogenic acids.

AMATEA® is exclusively produced by independent farming families, not industrial plantations. Their farms are not mono-crop systems, instead, farmers plant guayusa in similar growing techniques to agroforestry and permaculture in which crops are grown among trees and other vegetation utilizing patterns observed in nature. Growing in this method reduces the need to degrade or cut down the forest and creates a more diverse, productive, profitable, healthy, ecologically sound, and sustainable land-use system.