The average U.S. consumer will have around 220 mg of caffeine per day, which is about the amount in two cups of coffee.[i]  Besides routine, the aim is to increase mental alertness and focus throughout the day. While caffeine has therapeutic benefits, it can also cause unwanted side effects i.e., the nervous, jittery feelings that make it hard to sit still and concentrate. A contradiction like this has conflicted consumers for years. But it has also inspired Texas-based Applied Food Sciences to conduct further research into new botanical ingredients. Recent findings suggest that caffeine from the Amazonian Ilex guayusa plant can produce a bright and focused energy experience while mitigating some of the undesired effects traditionally brought on by caffeine.

Caffeine has its repercussions. Too much of it, and you might exhibit side effects such as headache, nervousness, irritability, fast heartbeat, and muscle tremors.[ii]  For some people that are more sensitive to caffeine, just small amounts may prompt a jittery sensation. While the end goal may be alertness or improved cognitive function, our nervous system’s response to caffeine can make it difficult to sit still and focus.

To better understand the physiological effects of caffeine in the human body, we look to our adrenal medulla and a specific hormonal response to caffeine ingestion. As our body metabolizes caffeine, it begins to stimulate the release of epinephrine (better known as adrenaline), our “fight or flight” hormone.[iii]  We typically think of our “fight or flight” response as an evolved survival mechanism, where sudden stress will induce a release of adrenaline, enabling people and other mammals to react quickly to life-threatening situations. Epinephrine triggers a cascade of physiological changes, including increased heart rate, rapid breathing, and muscle tension.[iv]  However, like with caffeine’s side effects, the physiological responses to epinephrine are not very helpful in non-life-threatening circumstances like another cup of coffee while trying to study for a mid-term.

The Making of a Modern Energy Ingredient

The caffeine paradox inspired Applied Food Sciences (AFS) to conduct further research into a lesser-known botanical called guayusa (gwhy-you-sah), a holly species native to the Amazon with a unique blend of caffeine and polyphenol antioxidants. Studies for guayusa came on the heels of anecdotal experiences from the local Kichwa people native to Ecuador and most familiar with the plant. One story of “The Night Watchmen” is told where Amazonian hunters would drink guayusa before leading their parties at night. It is said that while guayusa sharpens their awareness, it also allows them to sit perfectly still without restlessness. Consumer trials observed similar experiences in feeling guayusa as “a calmer, more focused energy.” To explore this further, AFS patented its branded AmaTea® organic guayusa extract and began conducting further clinical research. 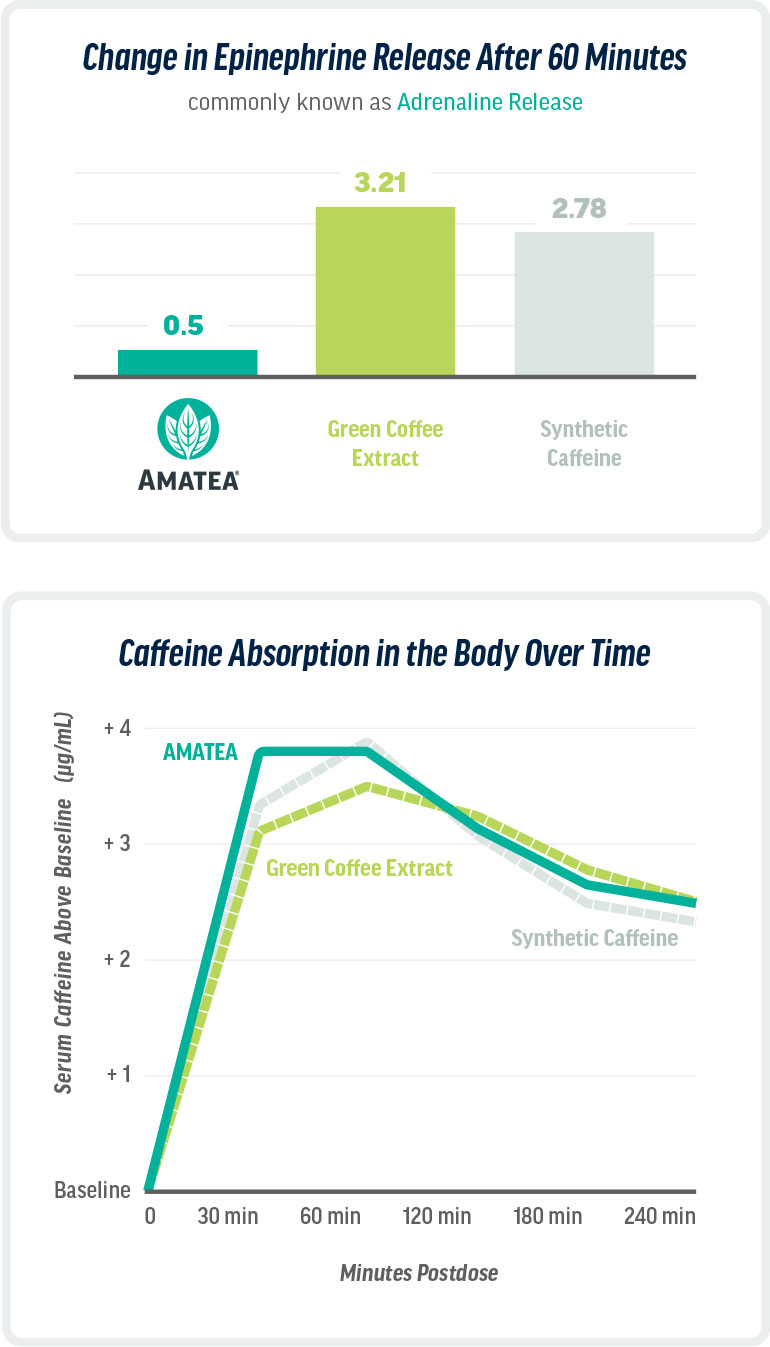 In a double-blind crossover study, subjects were given 200 mg of caffeine from AmaTea® organic guayusa extract, a green coffee extract, and a synthetic control. One of the study’s aims was to identify the impact of guayusa on certain neurotransmitter functions to determine why guayusa is experienced differently from other forms of caffeine. The most intriguing finding was that AmaTea® stimulated a significantly lower increase in epinephrine when compared to the control and the green coffee extract.iii

The implications are significant in determining the therapeutic applications for AmaTea®. Jackson Zapp, VP of Innovation with AFS explains, Jackson Zapp, VP of Innovation with AFS explains, “It is fascinating to see current clinical evidence that supports historical, anecdotal accounts of guayusa. We can start to identify how this ingredient may aid in our ability to stay focused and cognitively perform at greater levels. Even in sports nutrition, we see AmaTea® supporting athletes that desire a more controlled performance while wasting less nervous energy. AmaTea® has real promise for many modern energy applications today.”

To further explore the benefits of AmaTea®, AFS partnered with the University of Memphis College of Health Sciences to fund a study investigating the impact of functional ingredients on gaming performance. The current study aims to compare the effects of AmaTea® on various measures of cognitive performance, mood, motivation, and overall gaming achievement. The investigators hypothesize that both AmaTea and caffeine will improve outcome measures more than placebo, with more considerable improvement noted for AmaTea® due to the particular antioxidant makeup.

Supporting the Next Wave of Energy Products

A new era of premium high-performance energy has taken over. Today’s products promise much more than the refined sugar and synthetic caffeine of old. Consumers want clean, natural ingredients that they can trust, but they also desire more from their product with greater functionality. Brands like Bang, CELSIUS, Reign, C4, GFuel, A-Shoc, Gamer Fuel, and others are ushering in the latest energy segment – showing growth that the category has not seen in decades. Bang alone soaring from $345 million in sales in the Spring of 2019 to over $1.1 billion in just one year.[v]

So, what makes these energy brands so successful? For starters, they offer an assortment of added functional benefits like focus, concentration, stamina, vitamins for eye health (screen time), adaptogens, stress relief, ATP, and amino acids. But it is worth noting they almost always have something to address jitters. A telling sign that the caffeine paradox is reaching the mainstream level of consumer awareness. Applied Food Sciences is one of many ingredient suppliers supporting the new wave of energy brands, and guayusa perfectly fits the bill. 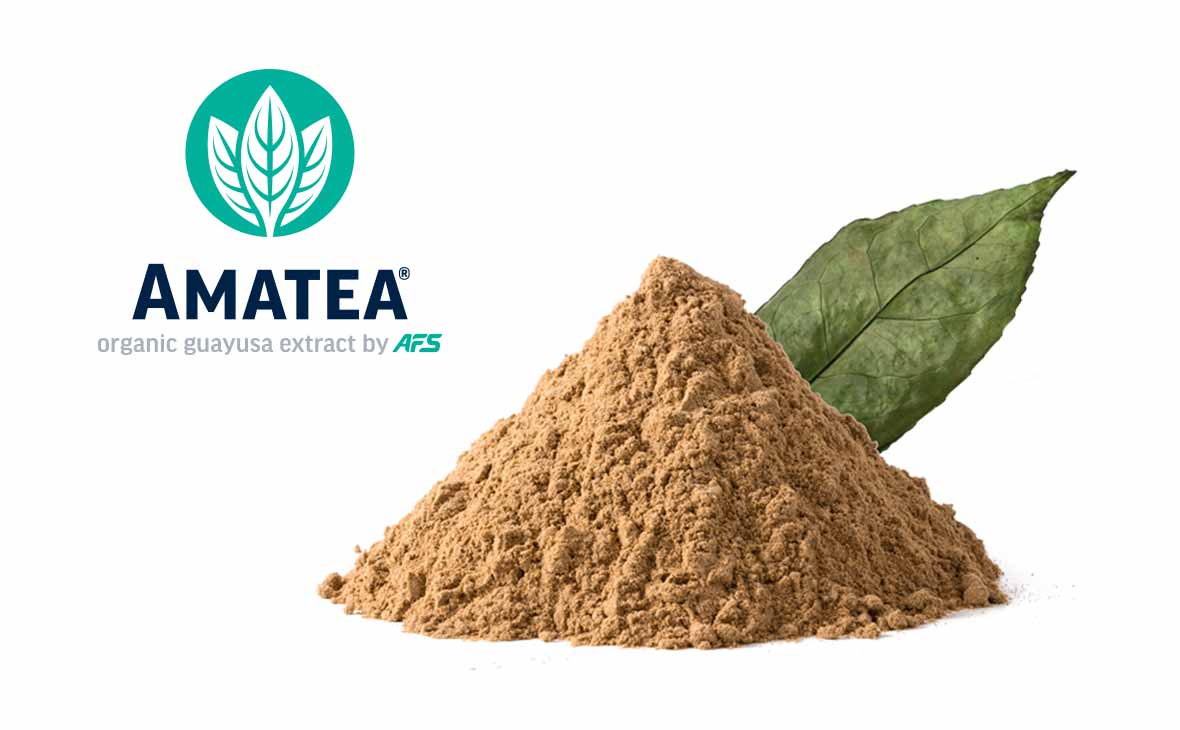 “As a functional ingredient supplier, we have seen considerable interest in our natural and organic energy,” explains John Kathrein, National Sales Director at Applied Food Sciences. “Our organic caffeine solutions in PurCaf® (from organic green coffee) and PurTea® (from organic green tea) are great starting points because they contribute to the desirable clean label and premium energy appeal. AmaTea® organic guayusa extract, on the other hand, is a patented ingredient consisting of a unique blend of caffeine and polyphenol antioxidants. This premium ingredient provides a more nootropic, cognitive energy experience and is unlike any other caffeine.”

[ii] Mayo Clinic 2021. Caffeine: How much is too much? (https://www.mayoclinic.org/healthy-lifestyle/nutrition-and-healthy-eating/in-depth/caffeine/art-20045678) 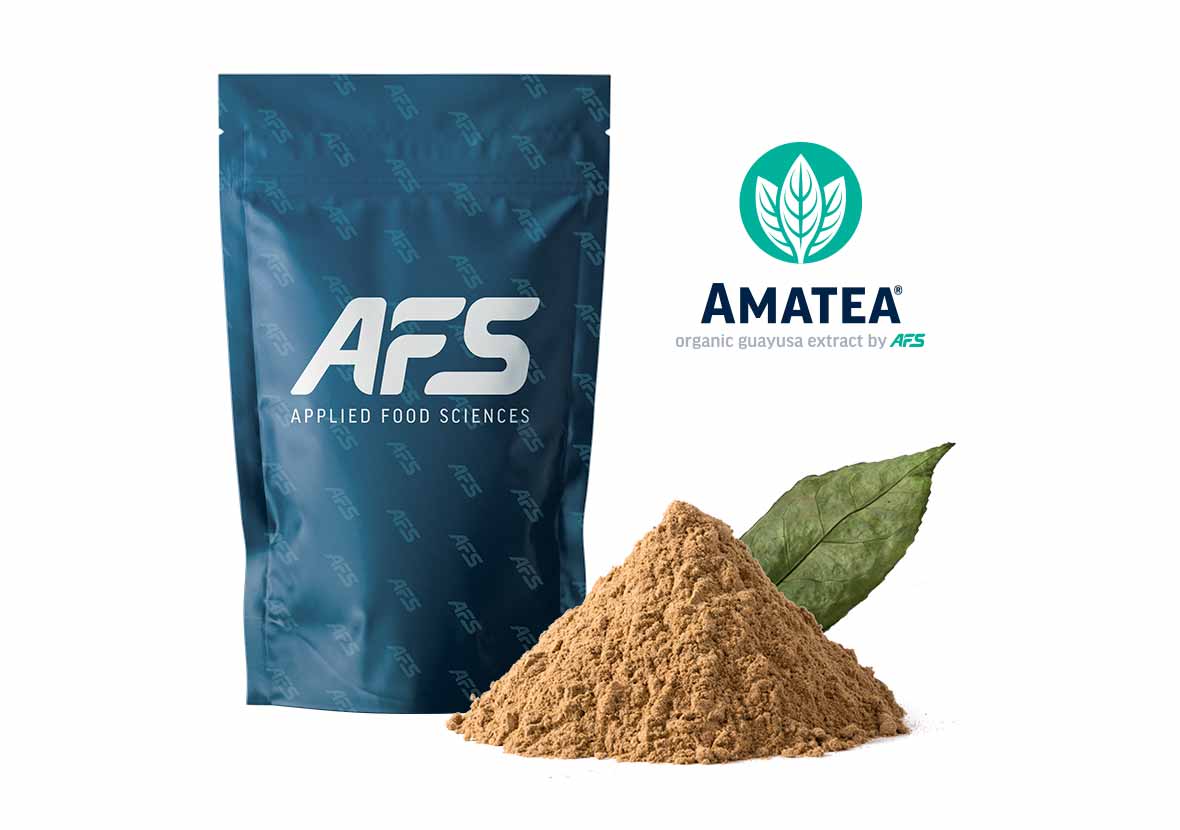 The story of guayusa

We want to share our story about the broader impact that sourcing botanicals can have on communities. This article tells the story of a novel Amazonian tea and its incredible impact on the indigenous people that produce it. What is Guayusa?  Guayusa...

Anything but CBD – The Real Opportunity in Hemp

Picture this – by 2030, the licensed land to grow hemp expects to increase to over 9M acres.[i] But experts predict nearly 80% of the future allocation will go towards grains, not CBD! It is quite a contrast to our current state of affairs, where we dedicate more than...

The Heart of Plant Based Meats

No disrespect to the original veggie burgers, but consumers may never settle for dry, spongy patties again… not after trying an Impossible Burger. The bar is set on what is forecasted to be an $85 billion industry by 2030.